LUXEL has been the proud participant in dozens of space flight missions starting in the 1970 – from Skylab to the Mars Curiosity Rover & New Horizons and beyond.

Apollo Telescope Mount (ATM) aboard Skylab
Filter type: Aluminum:Silicon, Indium:Titanium, Tin:Germanium
Launch date: May 14, 1973
Status: Operated until 1974
The instrument functioned as a solar observatory and included two UV instruments that imaged the sun and its spectra on photographic film operated manually by astronauts. More information about the ATM here.

EXOSAT
Filter types: Lexan, Parylene N/Aluminum, Boron
Launch Date: May 1983
Status: Operated until April 1986
This X-Ray observatory launched by the European Space Agency was one of the first missions to carry an onboard computer, allowing unprecedented data processing and program handling from Earth. In the three year lifespan of EXOSAT, it made 1780 X-Ray observations while flying on an elliptical orbit. Read a summary of the mission here.

ROSAT Satellite
Filter type: Lexan with Carbon, Tin, Beryllium, and Aluminum
Launch date: June 1, 1990
Status: Operated until February 12, 1999
A Germany/US/UK collaboration that in part conducted an all-sky survey in the soft X-Ray band, ROSAT (short for Röntgensatellit which is German for X-Ray satellite) imaged more than 150,000 objects. More information about the mission here.

MSSTA Sounding Rocket
Filter types: Silver, Lexan/Yttrium/Silicon, Aluminum/Yttrium/Carbon, Silicon/Phth/Yttrium, Titanium, various other combinations
Launch dates: May 13, 1991; November 3, 1994; April 10, 2002
Status: Three successful flights
The Multi-Spectral Solar Telescope Array (MSSTA) was a sounding rocket built by Stanford that tested new technologies for EUV imaging of the sun. Each of the three successful flights contained between 11 and 19 telescopes that were the precursors for the instruments flown on mission such as SOHO (1995) and TRACE (1998). Read more about MSSTA here.

Solar and Heliospheric Observatory (SOHO)
Filter type: Meshed Aluminum/LUXFilm® Polyimide entrance filters for the EIT
Launch date: December 1995
Status: Scheduled to be operational through 2014.
A joint effort between the European Space Agency and NASA, SOHO orbits around the sun 1.5 million kilometers from Earth. It monitors the solar interior, surface, and atmosphere and takes daily images of the sun. One use of this information is to help scientists predict space weather. Luxel built entrance filters for the Extreme Ultraviolet Imaging Telescope (EIT) that focuses on low coronal structure. Learn more about this mission from NASA and ESA here.

Cassini-Huygens spacecraft
Filter type: LUXFilm® Polyimide/ Carbon on grids
Launch date: October 15, 1997
Status: Reached Saturn’s orbit July 1, 2004 – expected to be active into 2017
This spacecraft, a collaboration between NASA and sixteen European countries, conducted missions studying Earth, Venus, and Jupiter on its way to Saturn. Upon reaching Saturn, the Huygens probe separated from the Cassini orbiter and landed on the moon Titan. Learn more about Cassini’s missions and see the latest images from the orbiter here.

Transition Region and Coronal Explorer (TRACE)
Filter type: Meshed Aluminum/Carbon
Launch date: April 1998
Status: Obtained its last image June 21, 2010
TRACE was a NASA small explorer mission to collect high resolution images of the solar corona, transition region, and photosphere in order to study the solar magnetic field. Images from TRACE have contributed to more than 1000 scientific publications. Details about the mission as well as an extensive image gallery can be viewed here.

IMAGE
Filter type: Silicon/ LUXFilm® Polyimide/ Carbon and Carbon/ LUXFilm® Polyimide/ Carbon
Launch date: March 25, 2000
Status: Operated until December 2005
The Imager for Magnetopause-to-Aurora Global Exploration (IMAGE) spacecraft was the first dedicated to studying the Earth’s magnetosphere. In particular, it provided global images of the magnetosphere in order to study how it responds to solar winds. It contained three different neutral atom images, and Luxel filters were part of the High Energy Neutral Atom (HENA) Imager which measured the 10-500 keV range. The mission page can be viewed here.

HETE-2 Satellite
Filter type: Aluminum/LUXFilm® Polyimide on the SXC
Launch date: October 9, 2000
Status: Operated until March 2007
The High Energy Transient Explorer (HETE) is a small satellite that studies gamma ray bursts operated by the Center for Space Research at MIT. HETE-2 was launched four years after HETE was lost in launch. Luxel had filters aboard the soft X-Ray camera (SXC) that was built at MIT.

J-PEX Sounding Rocket
Filter type: Meshed Aluminum on the EUV Spectrometer
Launch date: February 22, 2001
Status: Flight failed in February 2000, same instrumentation flew again in February 2001
The Joint Astrophysical Plasmadynamic Experiment (J-PEX) mission was designed to study the quantity of helium in white dwarf stars, the signature of which can only be differentiated in the interstellar setting in the EUV range. Luxel built filters for the high resolution EUV Spectrometer aboard the sounding rocket. Even though the flight was aborted without collecting any science data in 2000, the filter survived and was flown on the repeat mission in 2001. Read more about the mission here.

SMART-1 satellite
Filter type: Aluminum and Magnesium filters on the D-CIXS
Launch date: September 27, 2003
Status: Deliberately crashed into the moon’s surface September 3, 2006
SMART-1 (Small Missions for Advanced Research and Technology 1) was the first European Space Agency mission to the moon. The satellite orbited the moon and studied the lunar surface. A relatively small satellite, it pioneered the use of a solar-powered ion drive as a mode of space propulsion. Luxel filters were incorporated into the Demonstration of a Compact X-ray Spectrometer (D-CIXS), an X-Ray telescope used to identify elements on the moon’s surface. More about the mission can be found here.

MESSENGER
Filter type: Meshed Aluminum/ LUXFilm® Polyimide/ Aluminum, Meshed Palladium/ LUXFilm® Polyimide/ Palladium
Launch date: August 3, 2004
Status: Crashed into Mercury’s surface on April 30, 2015, outliving its expected lifespan by nearly four years
MESSENGER (MErcury Surface, Space ENvironment, GEochemistry, and Ranging) is the first spacecraft ever to orbit Mercury and only the second spacecraft to reach Mercury. Thus far, MESSENGER has orbited the planet over 2000 times and has imaged the entire surface. The spacecraft has collected a lot of data on the magnetic field of the planet and also confirmed the existence of polar ice. Learn more about this NASA mission here.

Swift Spacecraft
Filter type: Meshless LUXFilm® Polyimide/ Aluminum and LUXFilm® Polyimide/ Carbon on the XRT
Launch date: November 20, 2004
Status: As of April 2013, all systems aboard Swift are still operational.
Swift is s a NASA space observatory containing three telescopes that specializes in studying gamma ray bursts (GRBs – powerful flashes of gamma radiation) in hopes of determining what causes them. Luxel filters were on the X-Ray Telescope (XRT) which provides spectral analysis of the GRBs. Learn more about the mission here.

New Horizons
Filter type: Meshed Carbon/ LUXFilm® Polyimide/ Carbon, Meshed Aluminum/ LUXFilm® Polyimide/ Carbon as part of PEPSSI
Launch date: January 19, 2006
Status: Expected to arrive at Pluto in 2015
The New Horizons NASA spacecraft is on its way to the outer solar system where it will study Pluto and its moons. It’s controlled primarily from the Johns Hopkins Applied Physics Lab, who co-built most of the craft along with the Southwest Research Institute. There are seven major instruments aboard, and Luxel’s filters are part of the Pluto Energetic Particle Spectrometer Science Investigation (PEPSSI) instrument in the plasma and high energy particle spectrometer suite (PAM). PEPSSI will help sample the upper atmosphere and measure the solar winds near Pluto. Learn more about the mission here.

Columbus Laboratory of the International Space Station
Filter type: Meshed Indium, Aluminum/Carbon, Tin/Germanium, Silicon
Launch date: February 7, 2008
Status: Operational
Columbus is a science laboratory built by the European Space Agency that is docked with the International Space Station. Luxel built filters for the SOL-ACES EUV and UV spectrometer that is part of the SOLAR observatory unit. Together with two other instruments on SOLAR, SOL-ACES helps to measure the sun’s spectral irradiance. As of 2012, the instrument provides continuous observations of the sun’s rotation. Further details on the SOLAR instrument can be found here.

Chandrayaan-1 Spacecraft
Filter type: LUXFilm® Polyimide/ Aluminum on the C1XS instrument
Launch date: October 22, 2008
Status: Operational until August 29, 2009
Sanskrit for “moon vehicle”, Chandrayaan was India’s first lunar space mission. In addition to a probe designed for chemical study of the moon’s surface, Chandrayaan-1 was placed into orbit and included eleven instruments to image most of the moon’s surface across IR, optical, and X-Ray wavelengths. Luxel’s filters were on collimators that were part of the C1XS instrument, an X-Ray fluorescence spectrometer that maps the abundance of six elements on the lunar surface. Learn more about the mission here.

PROBA-2 satellite
An EUV image of the sun taken from PROBA-2’s SWAP telescope during a partial lunar eclipse in January 2011.
Photo credit: SWAP team at the Royal Observatory of Belgium
Filter type: Meshed Aluminum, LUXFilm® Polyimide/ Aluminum as part of the SWAP instrument
Launch date: November 2, 2009
Status: Active
PRoject for OnBoard Autonomy (PROBA) are the smallest European Space Agency satellites designed to flight test new technologies as a final stage in their development. In addition to technology demonstrations, PROBA-2 conducts experiments related to solar observation and space weather. Two of the five instruments on board are designed to observe the sun, including the Sun Watcher using APS image Processing (SWAP), an EUV imager that contains Luxel’s filters. You can read more about the specifics of the PROBA-2 mission here.

Juno Spacecraft
Filter type: Meshed Carbon/ LUXFilm® Polyimide/ Carbon and meshed Carbon/ LUXFilm® Polyimide/ Aluminum
Launch date: August 5, 2011
Status: Active
Juno, named after the mythological goddess who was wife to Jupiter and was known for being able to see his true nature, is a NASA mission to Jupiter that aims to do much the same thing: study the conditions of the atmosphere and magnetosphere with the goal of better understanding the planet’s creation and evolution. The JEDI instrument which contains Luxel’s filters was developed by the Johns Hopkins University Applied Physics Lab and is designed to collect data on the distribution of ions in Jupiter’s polar magnetic fields. It will take five years from the launch for Juno to reach Jupiter, and it is schedule to orbit the planet for about a year. Read more about the mission here.

Mars Curiosity Rover
Filter type: Meshless Aluminum/ LUXFilm® Polyimide on the CheMin instrument
Launch date: November 26, 2011
Status: Landed on Mars August 6, 2012 – actively exploring the surface as of June 2013
One in a series of NASA robotic exploration missions to Mars, the main goal of the Curiosity rover is to study the habitability of the planet; specifically, whether or not the environment has ever supported microbial forms of life. The rover has an on-board laboratory in which in can conduct experiments on soil and rock samples it collects from the planets surface. Luxel’s filters are on the Chemistry and Mineralogy X-Ray Diffusion Instrument (CheMin), which measures amounts of various minerals in powdered surface samples through X-ray diffraction. Learn more about the mission here.

VERIS (Black Brant IX) Sounding Rocket
Filter type: Meshed Aluminum
Launch date: August 8, 2013
Status: Successfully completed a 15 minute flight
Luxel provided filters for the VEry high angular Resolution Imaging Spectrometer (VERIS) instrument aboard this sounding rocket. VERIS had capabilities of measuring the sun’s upper atmosphere at a resolution about eight times clearer than any telescope in space at the time of flight. The rocket launched 150 miles into space and had six minutes in which to collect data without interference from the Earth’s atmosphere. Read more about the mission here. 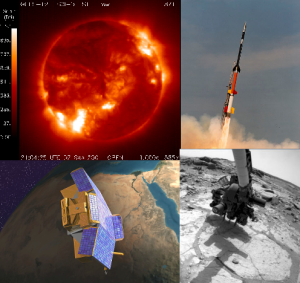 To learn more about some of the missions we’ve been involved with, including details about filter types and particular instruments that carried our filters, please follow the links below.